CLOSED due to COVID-19

Cork Public Museum is housed in a two storey Georgian house commanding a central position in Fitzgerald Park, Cork. Originally built in 1845 by the Beamish family, the building, then known as “The Shrubberies” was their family home for decades. The property and surrounding land was eventually purchased by Cork Corporation for the purpose of housing the Cork International Exhibition of 1902 and 1903. The site of the exhibition was opened as Public Park in 1906. A site of some 18 acres of landscaped gardens; the park is a magnificent setting for the museum. Flanked by U.C.C. on one side and the riverside gardens of Sunday’s Well on the other, the park bestows a sense of history that complements the ambience of the museum perfectly. The Riverview Café, recently opened in the museum’s extension, fully exploits the commanding views of the river Lee and provides the visitor with a tranquil haven to enjoy a coffee and a snack.

The museum was originally opened in 1910 under the curatorship of J.P. Dalton. After the burning of Cork in 1920, the building temporarily held the Municipal Offices. The building also served as the Air Raid Protection office during the Emergency. Cork Public Museum finally re-opened in 1945 with M.J. O’Kelly; Professor of Archaeology in U.C.C. as Curator and it was he that began the tireless work of collecting, cataloguing and exhibiting material that successive Curators continued.

The Collections
The collections of Cork Public Museum are as rich and diverse as the history of the city itself. We are particularly proud of our archaeological collection that features some of the most important archaeological finds from this region. Among them is Ireland’s oldest Pick and Shovel, discovered in a Bronze Age copper mine in Mount Gabriel, the Iron Age Cork Helmet Horns and the Garryduff Gold Bird, a triumph of Early Medieval skill and craftsmanship. Our ethnography collection contains some of the finer examples of workmanship from areas as far away as Australia, New Zealand and the South Seas Islands.

Classical archaeology is also represented in Cork Public Museum with a small but impressive collection of artefacts from ancient Egypt and Greece. The importance of Cork as a thriving medieval town is explored in an exhibition that contains objects excavated from recent digs around the medieval town wall. This exhibition also serves to remind us that archaeology is a constantly evolving area where new discoveries are being made everyday.

Cork Public Museum places a particular emphasis on the trades and crafts of Cork and this is reflected in the magnificent collection of Cork silver on permanent display in the museum with pieces dating as far back as the late 18th century. Some of the more recent pieces include a fine collection of Republican silver, so called because of the period during the War of Independence when any silver made here could not be sent to Dublin to be assayed and so were given a special Cork hallmark. The wealth of Cork’s lace making tradition is beautifully represented in our collection of Yougal Lace.

From a historical point of view, the museum focuses on Cork’s own contribution to the fight for Irish Independence. In our 1916 to 1921 exhibition we commemorate the special role that Cork men and women played in the War of Independence. Particular attention is paid to the parts played by Tomas MacCurtain and Terence MacSwiney , first and second Republican Lord Mayors of Cork who both died in 1920. The museum also holds a large archive of 18th and 19th century documents pertaining to important historical events of those centuries. Of particular note in these collections are the illuminated address presented to Parnell by the Corporation of Cork and the Cobh Famine Relief Book. 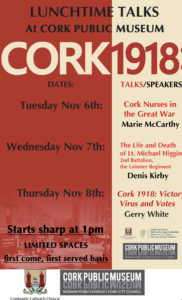 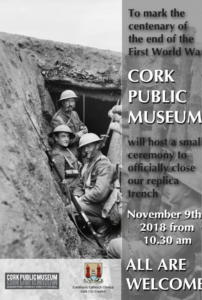 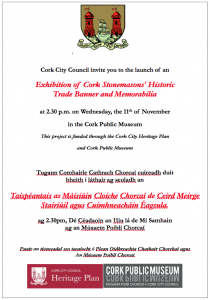