Peter’s lecture will follow closely the layout of his book, Maritime Paintings of Cork, the material contained already in that publication. There have not been many new discoveries of maritime paintings since then.

The intention in publishing the book was to highlight the pressing need for a good maritime museum to be founded in Cork. Ideally this would be located in the present Port of Cork headquarters, assuming their plan to vacate the building eventually and move to new modern headquarters is realized. The two functions could co-exist in the present building, with some clever renovations and adaptations. The vision is to have a fine maritime museum in that building, and the great coverings of the storehouses all put back in place. With a mix then of cafes, restaurants and marine exhibits, it could become a great heritage centre for Cork. Historic vessels could moor temporarily or permanently at the quayside. It’s a simple, practicable idea, with a good mix of commercial and non-for-profit functions, so it need not be a very expensive undertaking.

Tony O’Malley, A Celebration of his art, in his centenary year

Tony O’Malley was born in County Kilkenny in 1913 and died there in 2003. Vera will cover his beginnings as a painter, when in a TB sanatorium he began to draw, his increasing commitment to his art, his exile or escape to St Ives and his success as an artist in Ireland.  Like Francis Bacon he was essentially self taught.

When he left Ireland, aged 46, his style was figurative. The ways in which his work registers responses to the St Ives school, an epicentre of abstract art during the War, will be discussed. His nature-based abstraction has two distinct colour palettes; the cooler, low toned one of these islands & the warmer, richer, sunny palette of the Bahamas which became important to him after his marriage to Canadian artist Jane Harris.

All that glitters: Cork Silver

This lecture assumes no significant level of knowledge on the part of the audience about the silver and gold wrought in Cork from early times.  Beginning with some discussion on the properties of the metal itself, the lecture will include a broad coverage of the historical context of silver and gold in Cork and the establishment of the Cork Guild in 1657. It will cover the work of several significant makers and will also show how the styles of their work followed broader trends in fashion originating in Dublin, London or beyond, though in several instances with local nuances.

The lecture touches on the marks on Cork silver, official hallmarks and other local “Town” marks.  It also touches on the influence of Huguenot goldsmiths in Cork and also on the fact that silver was also wrought in other notable towns in the county, such as Kinsale and Youghal.

The lecture will trace the economic fortunes of Cork in the eighteenth century and what that meant for the craft.  Later, the impact of the Act of Union will be seen and the consequent customs union upon the trade and how it had effectively died out by the 1840s, before being revived in very particular circumstances in the early twentieth century.

The Hunt Museum Bronze Horse: a journey in provenance and discovery

One of the most popular exhibits in the Hunt Museum is a bronze Rearing Horse cast in the style of Leonardo da Vinci. The bronze is one of a number of similar other bronzes including those held at the Metropolitan Museum, New York, the Szepmuveszeti Museum, (Museum of Fine Arts) Budapest, and the Jeannerat Collection, London. The ‘Rearing Horse’ was bought by John and Gertrude Hunt, at auction at Sotheby’s, London in 1966. Sotheby’s description in the 1966 auction catalogue described it as a ‘bronze figure of a rearing horse, cast from a model by Leonardo da Vinci.’

The Book of Kells: an art historian’s perspective

Kells: art and history
In recent years art historians have paid very little attention to the book of Kells, despite the many questions that remain unanswered.  Very little is known about the circumstances in which it was made and why it remained unfinished. The extraordinary ‘micro’ ornament defies belief and even today it is hard to envisage how it was made – how was it painted and how long it took to make.  Very little attention has been paid to the many witticisms found within the book (some historians even deny there is any humour) and the many mysterious compositions it contains.  Especially interesting is the figure style, often thought to be completely abstract in flavour, though careful scrutiny indicates that the artists were far more familiar with naturalism than we might think. Recent developments in digital technologies, led by TCD,  have allowed fascinating new insights into the manuscript and its decoration. 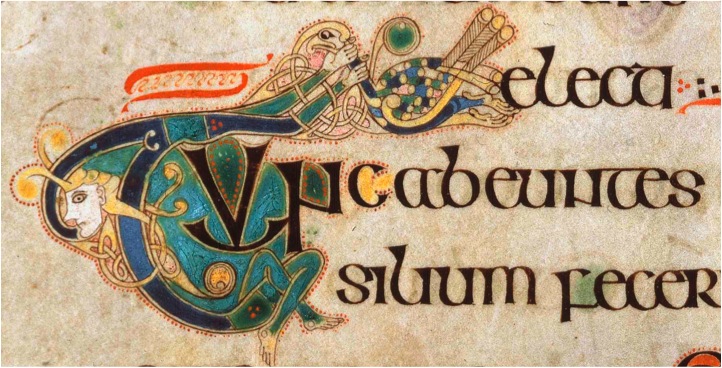 All too often the book is seen as an interesting historical relic – something that tourists must see along with the Guinness brewery and the Blarney stone yet the advent of digital technology is transforming our appreciation of the work, offering new ways of understanding old problems. Roger will attempt to show that the Book of Kells is a truly astonishing work of art – brilliantly imaginative, bedecked with dazzling colour, and full of joie de vivre.  He will also attempt to find answers to at least some of its many mysteries!

• For the speakers’ credentials see Menu, Our Speakers.