Jane E. Choy-Thurlow is a docent and enjoys giving lectures and tours at the Mauritshuis, Prince William V gallery and Huygens Museum Hofwijck in The Hague, The Netherlands. A few of the many exhibits in the Mauritshuis she has been part of are: the legendary Johannes Vermeer exhibit which was one of the most important exhibits of the 20th century, Rembrandt by Himself, Holbein, Portraitist of the Renaissance and Rubens and Breughel:  A Working Friendship. She has worked as a volunteer for many years at the RKD (The Dutch Institute of Art) which is the largest repository for art information in the world.

As well as being an accredited lecturer for The Arts Society, she is a founding member of the Arts Society of The Hague where she had the pleasure of working with Anthony. She has held many committee positions including chairman and Mainland Europe Area Chairman and is presently Area Trainer and a New Societies/Societies Support Advisor.

She was also part of the team in the Centre for Educational Research and Innovation in the OECD (Organisation for Economic Cooperation and Development) in Paris where she concentrated on educational issues.

Born and raised in Massachusetts and married to a Dutch citizen, she has lived in Holland for over 30 years.  She received her BSc from Salem State University, USA, her MEd from Trinity College Dublin and continued art history studies at Leiden University.

In 2018 she was given the honour of Knight in the  Order of Oranje Nassau by the Dutch King Willem Alexander of Orange for her knowledge and work in the field of the arts esp. 15th to 17th century Dutch and Flemish art. 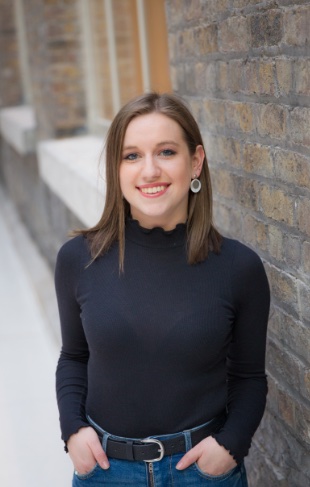 Sarah joined the National Gallery of Ireland as a Curatorial Fellow in 2018. She supports the curatorial department in the preparation of exhibitions and the management and display of the permanent collection. She devotes much of her time to acquiring photography for the Gallery’s collection, which has grown rapidly over the past three years. Sarah carried out her undergraduate and master’s degrees at University College Cork, 2011 – 2015, and over the past 5 years has worked in numerous roles in the museum sector, from education programming to marketing and fundraising.  Sarah has curated a number of exhibitions at the National Gallery of Ireland, including Nathaniel Hone: Travels of a Landscape Artist and, most recently, View of Ireland: Collecting Photography and Moment in Time: A Legacy of Photographs. Sarah has administered and curated the Gallery’s Zurich Portrait Prize for the past three years. Recently, she formed part of the judging panel for This is Art!, a national art competition for young people run by RTE and Creative Ireland.  Sarah offers university talks and lectures on the history of Irish photography and has worked as a guest lecturer in UCC for the past two years. In addition to working with public collections, she researches and sources photography for private collectors.

Professor Fiona Kearney is the founding Director of the Glucksman, a purpose-built contemporary art museum on the campus of University College Cork. In this position, she has curated numerous exhibitions of Irish and international art, with a particular emphasis on how contemporary art practice relates to research directions within academic discourse. Recent exhibitions include Home: Being and. Belonging in Contemporary Ireland, Circadian Rhythms: Art and Biological Time, The Parted Veil: Commemoration in Photographic Practices, PRISM: the Art and Science of Light, and Outposts: Global Borders and National Boundaries. Throughout her academic and professional career, Kearney has received several distinguished awards including the designation of college scholar by UCC, bursary awards from the Arts Council of Ireland, the NUI Prix d’Honneur from the French Government, and a UCC President’s Award for Research on Innovative Forms of Teaching. She is an assessor on the Museum Standards Programme of Ireland, and a board member of the Irish Architecture Foundation, VISUAL, Carlow, Cork Midsummer Festival and Cork Chamber. She is a member of the Irish Museums Association, ICOM, IKT, Universeum, and AICA.

Jessica O’Donnell is an art historian and Head of Education at the Hugh Lane Gallery. A graduate of Trinity College, Dublin, she wrote her postgraduate thesis with the University of St Andrews on Samuel Forde: A Cork Artist (2005).  Her published work includes the books Discover Art (2007), short-listed for the CBI Bisto Children’s Book of the Year Award, 2008 and Harry Clarke The Eve of St Agnes (2012). She has published articles in Museums Ireland (2007); The Burlington Magazine (2016) and the Irish Arts Review (2017). Her published essays include ‘”The Street…the only valid field of experience” : Francis Bacon and the photography of John Deakin in Francis Bacon: A Terrible Beauty (Steidl,  2009), ‘Hugh Lane and the Firm of Daniel Egan Ormond Quay: The Recollections of Joseph Egan’, in Sir Hugh Lane: That Great Pictured Song (2017); and ‘A gorgeous gallery of poetic pictures’: Harry Clarke, Harold Jacob and John Keats’s ‘The Eve of St Agnes’ in Harry Clarke and Artistic Visions of the New Irish State (Irish Academic Press, 2019).

Danielle O’Donovan is an architectural historian with a passion for engaging diverse audiences with the historic environment. She is programme manager at Nano Nagle Place, overseeing exhibitions, learning, digital communications, programming, volunteering and marketing. Danielle delivers lectures in architectural history for the History of Art Department, University College Cork and a dissertation module tutor at Cork Centre for Architectural Education. Danielle holds a B.A. in History and the History  of Art and Architecture, an M.Sc. in Technology and Education, and a Ph.D. in Architectural History from Trinity College Dublin.

Dr Griffin Murray is a lecturer in the Department of Archaeology, University College Cork, where he lectures in the areas of Museum Studies and Medieval Irish art and craft. He is also President of the Cork Historical and Archaeological Society.   A graduate of University College Cork (BA, MA, MBS, PhD), Dr Murray worked in the museum sector in Ireland for several years before joining the staff of UCC. He has previously served as Hon. Editor of the Journal of the Cork Historical and Archaeological Society and as Vice-President for Munster and Reviews Editor for the Royal Society of Antiquaries of Ireland. Dr Murray is the author of over 30 academic papers, while his book on The Cross of Cong: a masterpiece of medieval Irish art was published in 2014. His most recent research and publications relate to Viking art in Ireland and he is currently one of the editors of a forthcoming book on Urnes stave church in Norway, a UNESCO World Heritage Site.

Laurence Counihan is an Irish-Filipino writer and critic, who is currently undertaking PhD study in the History of Art Department at University College Cork. Here he delivers lectures across the undergraduate programme, with a principle focus on the areas of modern and contemporary art, critical theory, and aesthetics. His research is located at the intersection of art, philosophy, and technology, and is presently concerned with the history and theory of the digital image. As a critic, his writings have appeared in both online (Circa Art Magazine) and print (Enclave Review, Paper Visual Art) publications dedicated to contemporary art.