Diarmuid will outline the contribution of these two great Cork brewing families to the heritage of the city. William Beamish and William Crawford were partners in a merchant business from 1785, and in 1792 they established the Cork Porter Brewery on South Main Street. These two men, the former from West Cork and the latter from Co. Down, became quite wealthy and they, and the succeeding generations of their families, left a notable legacy in the art, architecture, education and commerce of Cork.

The talk looks at the history of one of Clarke’s last and most celebrated works which was made for the International Labour Organisation in Geneva in 1929. When it was shown to members of the Irish government, they considered it to be highly unsuitable. Its representations of the female nude along with other details were regarded as inappropriate in a work intended to represent the Irish state. The Window remained in Dublin for the next fifty years and is now in a museum in Miami. The lecture examines the commissioning and production of the work and sets it within the wider contexts of the new state and the other international artworks commissioned for the International Labour Organisation. Completed in the same year as the Censorship of Publications Act, the talk considers how visual art can be as profoundly affected by censorship as books.

The work was completed in the same year as the Censorship of Publications Act, and the talk considers how visual art can be as profoundly affected by censorship as books.

With the exception of the Public and Commemorative Talks all  lectures are given on the second Saturday of the relevant month at Nano Nagle Place, Douglas Street, T12 X70A, Cork: see, Menu: Our Supporters

The talk will focus on Synge’s work as a photographer in the west of Ireland, and will then assess his influence as a photographer and writer on several Irish artists including John Butler Yeats, Jack B. Yeats, Harry Clarke, and Seán Keating.

“The Musée Nissim de Camondo: decorative art and architecture, grandeur and tragedy in a Parisian family of collectors”

The Musée Nissim de Camondo was inaugurated in 1936 in the former hôtel particulier of Comte Moïse de Camondo, a Parisian collector. The house was built by René Sergent between 1911 and 1914 at the edge of the beautiful parc Monceau. Comte Moïse de Camondo wished for it to be built in the style of the Petit Trianon of Versailles, being a great admirer of the art and architecture of the French 18th century. He filled the house with his very important collections of art, furniture, furnishings and objets d’art, always searching for the finest examples of their kind: marquetry, paintings, silver, china, and also innovative house arrangements contributing to social life. When his only son Nissim de Camondo died in World War I, as an airline pilot defending France, Comte Moïse left the house and its contents to the State, in memory of his son, stipulating that the museum bear his son’s name and that its contents remain in situ. During WW II his remaining child, his daughter Béatrice de Camondo and her children and husband became victims of the Shoah / Holocaust. The family were of Sephardic Jewish decent.

“Bauhaus 100: Manifestations of this Movement in Architectural Design in Cork”

2019 is the centenary of the founding of the twentieth century’s most influential school of design. This talk will concentrate on buildings built in Cork from the 1930s on, in an attempt to trace the influence of the Bauhaus and other centres of Modernism on the architecture of a provincial Irish city. Whilst focusing on Modernism, it will not ignore other competing ideas of what encapsulated ‘good design’ at the time. The past of the city will be brought to life using slides and lively descriptions.

Though often seen as remote, and isolated from metropolitan centres of culture, Donegal has both attracted and produced accomplished figures in the arts. This talk will look at three 20th century contemporaries, makers or collectors of art (or both), centring on the English painter Derek Hill who came to live in a Donegal glebe house in the 1950s. Nearby was Glenveagh, the grand castle of his friendly cultural and social rival Henry McIlhenny, wealthy American curator and collector of French painting from Ingres to Cézanne. Contrasting with the life and work of these urbanite arrivals is the background and art of Tory Island native James Dixon. His paintings, though encouraged by the example and support of Derek Hill – in another instance of friendship and rivalry – present a distinctively alternative, socialised image of the island to those of the more famous visitor. The talk will thus consider interconnected and contrasting ideas of creating and collecting art in the context of Donegal from the 1950s-1970s.

This Talk will survey the extraordinary career of Artemisia Gentileschi (1593-1653), from her formative years under her father Orazio, through the infamous trial involving her tutor and aggressor Agostino Tassi which has often defined modern readings of her artistic output. In doing so, and in anticipation of the landmark exhibition in London’s National Gallery (2020), we will seek to uncover the ‘real Artemisia’, delving into her paintings and exploring her prodigious skill. A keen follower of Caravaggio’s style of ground-breaking naturalism and chiaroscuro, Artemisia was never merely imitative, using singular approaches to familiar themes and combining crisp narratives with a lyricism that makes her one of the outstanding painters of the Italian Baroque. Her individuality as an artist is all the more striking when her works are seen alongside those of her contemporaries. Together with these broader issues, we will interrogate the extent to which Artemisia’s gender informed her art, particularly her portrayal of female subjects and her exploration of her own identity through her self-portraits. A rare example of a successful woman in what was then a thoroughly male-dominated discipline, Artemisia’s unique approach to the theme of femininity makes her a fascinating case study; as interesting, relevant, and daring to the modern viewer as she was in the seventeenth century.

Richard Alfred Millikin (1767-1815) had the idea of establishing an Academy in Cork, where a collection of the best specimens of artworks possible, should be provided to serve for the study of young artists. These artists would have free access to it, while any expenses incurred would be defrayed by the proceeds of an annual exhibition. By using his contacts in the worlds of business and art, in early nineteenth-century Cork, Millikin succeeded in establishing The First Munster Exhibition of Original Paintings in April 1815, to be repeated annually. This paper will explore the life and legacy of Millikin, demonstrating that without this pioneering man, world-renowned artists like Daniel Maclise and John Hogan would not have received a classically-inspired artistic training in their own city.

This presentation will examine aspects of St Finbarre’s Cathedral, the Honan Chapel in UCC and the sculpture of Seamus Murphy, looking at various factors, religious, historical, artistic and social, that resulted in them looking like they do. Architects, artists and patrons usually have particular ideas in mind, important to them, when they design or commission a work, but, for many reasons, these can be considerably modified in the finished piece. The meaning of a work therefore changes during the process of its creation, but also continues to change afterwards as new audiences interact with it.

An Indulgence to the Natives?: William Bedell’s Translation of the Old Testament into Irish 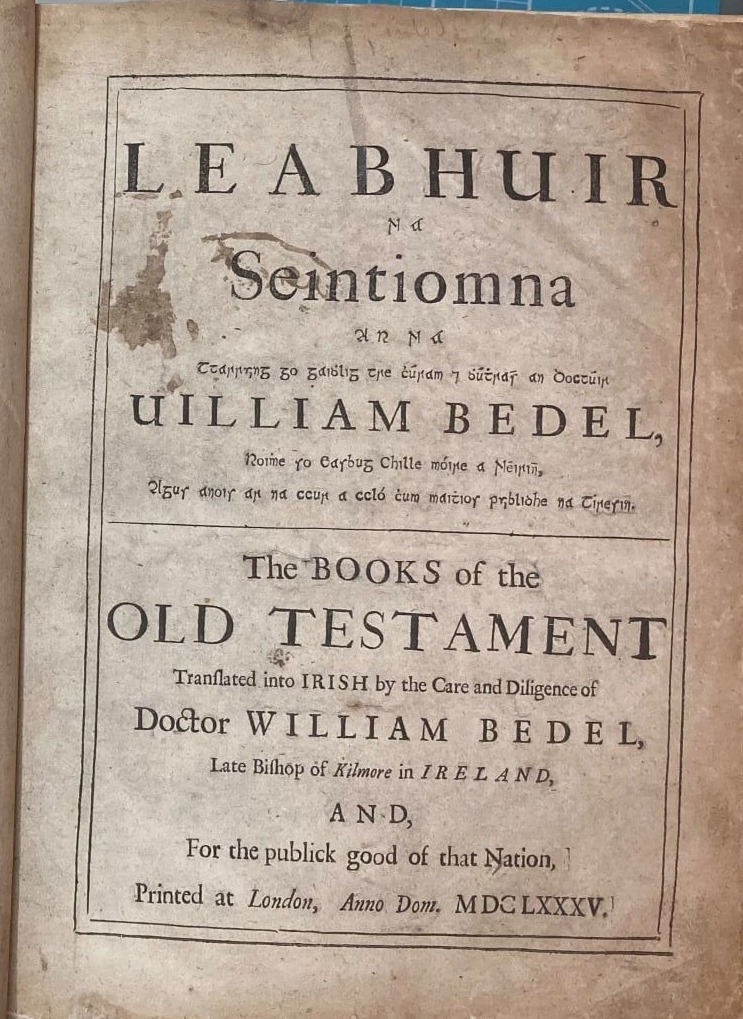 Born in Essex, England in 1571, the young William Bedell was educated at Emmanuel College, Cambridge, before being ordained for the Anglican Ministry in 1597.  Already Bedell was known for his scholarship in theology, the Bible and the classics, and was proficient in Arabic, Chaldean, Greek, Latin and Syriac. In 1607 he was sent to Venice as Chaplain to Sir Henry Wotton, English Ambassador to that City State.  While in Venice Bedell added Italian and Hebrew to his language repertoire, as he quickly realised that in order to teach people about religion and to communicate properly with them, one needs to speak their language.  This was a tenet he kept with him for the rest of his life and which came to the fore when he moved to Ireland to take up the position of Provost of Trinity College Dublin in 1627.  Throughout the remaining 14 years of his life he strove to put into practice what he had learned in Venice – that is to speak to people in their own language.  This culminated in his greatest labour, the translation of the Old Testament into Irish.  Sadly, he did not live to see the work published, but his legacy remains an important building block in Irish history.  In this paper Bláithín will take a step back from the Bible itself, to examine the influence Venice exerted over the young cleric, especially in relation to his determination to print an Irish language version of the Bible’s Old Testament.